These examples are designed to demonstrate how to use our modules with the Picaxe. All the modules which use the I2C bus have 1k8 pull-up resistors to 5v. You only need one set of resistors, located near the PicAxe, regardless of however many I2C devices you have connected to it.

Not shown on the schematics, you should fit a 100nF capacitor between the 5v supply and ground (0v). This should be located as close to the Picaxe chip as possible.

CMPS03 Magnetic Compass
This uses the I2C bus to connect the Picaxe to the CMPS03. It reads the single byte bearing and displays the bearing as a number 0-255 on the PC.

CMPS12/11 Tilt Compensated Magnetic Compass
This uses the I2C bus to connect the Picaxe to the CMPS12/11. It reads the single byte bearing and displays the bearing as a number 0-255 on the PC.

SRF01 Ultrasonic Ranger
The SRF01 uses a single pin for both serial input and output, however because the Picaxe uses separate pins for input and output, we still need two PicAxe pins. A schottky diode, such as a BAT85, is used to prevent the SRF01 driving the Picaxe's output. You can have up to 16 SRF01's connected to the PicAxe. The Range is displayed in a debug window on the PC. 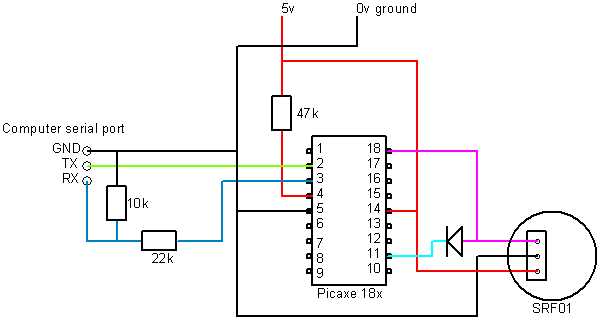 SRF04 Ultrasonic Ranger
To work with the PicAxe, the SRF04 requires its timing pin (marked "do not connect" on the tech page) connected to ground, as shown below.

SRF05 Ultrasonic Ranger
As the PicAxe uses separate pins for input and output, the SRF05's one pin mode is not usable on the PicAxe. This example uses the SRF05 in two pin mode, where the Trigger and Echo signals appear on the same pin. Note the SRF05's mode pin is unconnected to place it in two pin mode. The software for the SRF05 is identical to the SRF04 example above. 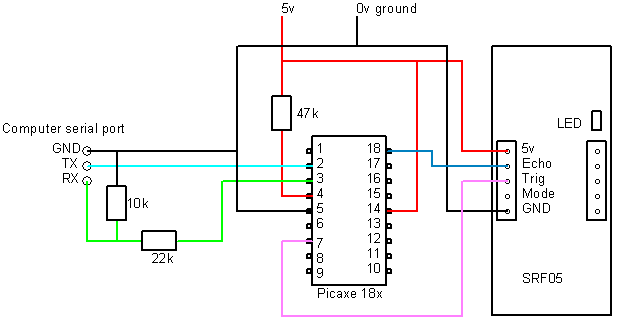 TPA81 Thermal Sensor
The TPA81 connects to the Picaxe using the I2C bus. This example displays the ambient temperature and 8 temperatures from thermal sensor, on an LCD03 module.

SD20 Servo Controller
Although the Picaxe is capable of outputting servo pulses, it places restrictions on your software and uses up a lot of valuable I/O pins. By using the SD20 chip, you can control up to 20 servo's.

SD21 Servo Controller
The SD21 is a ready wired module which can save a lot of time compared to the SD20 above, and the Picaxe fit on a socket on the SD21. This example moves a servo through its maximum range. 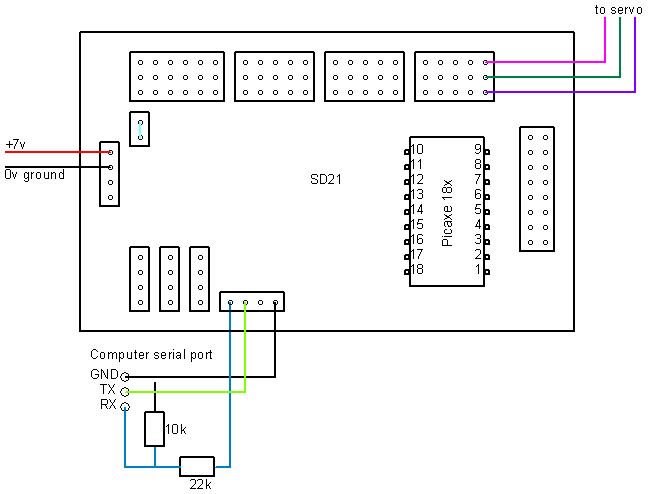 MD03 24V 20A Motor Driver
This example runs the motor forwards and backwards.

MD22 24V 5A Motor Driver
This example runs the motors forwards and backwards. 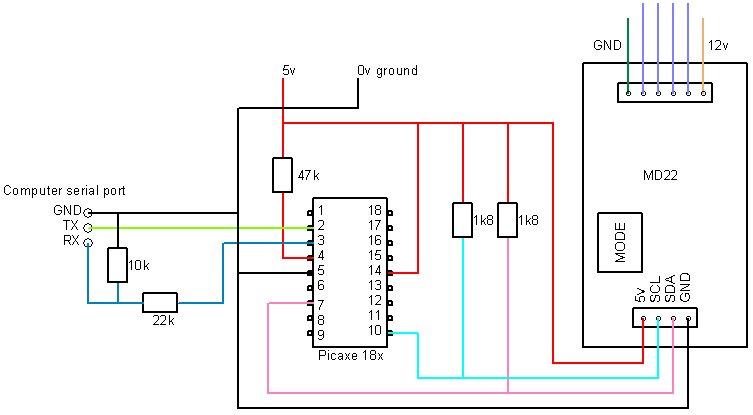 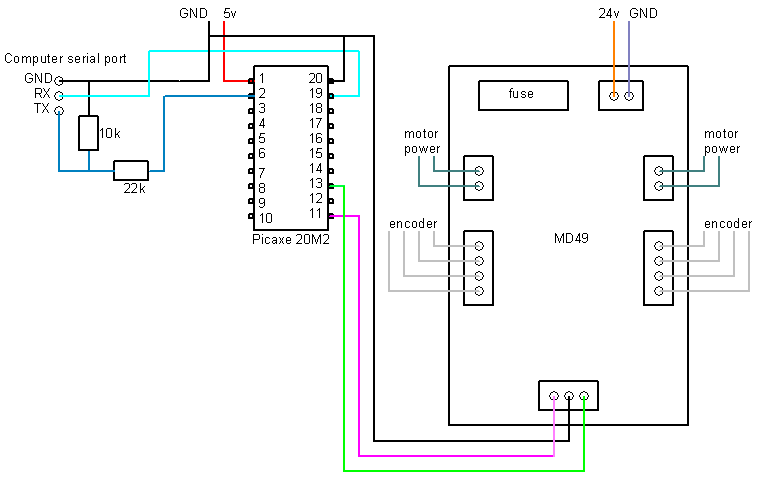